You will notice that in this piece I use “Bombay” rather than “Mumbai”. Somehow it seems more appropriate to the subject matter.

The Zoroastrian community is one of the things that makes Bombay special. The fact that the dominant religion of the ancient Persian empire should now survive in a handful of tiny communities, mostly in India, is bizarre in itself. But that the biggest of these communities, in Bombay, has acquired a legendary status for its levels of education, wealth and philanthropic contribution to the public good is truly remarkable.

Those wanting an introduction to the Parsi community should look elsewhere (this documentary, for example [start at 2:20] or Tanya Lurhmann’s ethnography The Good Parsi). As a barebones summary, Parsi is the name given to the descendants of Zoroastrians who fled Islamic persecution in Persia between the 8th and 10th centuries. They initially settled in Gujarat but many later shifted to Bombay, partly at the behest of the British East India Company which regarded them as skilled and reliable allies. Parsis who thrived in Bombay included noted industrialists and philanthropists such as the Tata family and political heavyweights like Dadabhai Naoroji who co-founded the Indian National Congress and also became Britain’s first Asian MP.

But what does any of this have to do with cafés? Well, my first sentence, where I talk about the Zoroastrian “community”, is a little misleading. In the 19th and 20th centuries, a second wave of Zoroastrians left Iran, notably Yazd and Kerman province, for India (whether this was a response to persecution or famine is a debate I won’t enter into). While this community, referred to as Irani, boasts its fair share of actors, journalists and even a famous mystic (Meher Baba), the most visible contribution it has made to Indian life, especially in Bombay, is the Irani café.

Cashing in on an apparent reluctance of Hindus to open businesses on corners (at least this is what I’ve been told, although I suspect this is a slightly simplistic reading of the vastu shastra, or ancient Hindu science of architecture) enterprising Iranis began to set up little corner cafes in the early 20th century. These joints became a staple of street life in cities like Pune, Hyderabad, Karachi and, above all, South Bombay.

I first became aware of Iranis in Suketu Mehta’s Maximum City, where he describes them as places with “the simplest of menus” that “serve time and shade”. Since reading that in 2005, I have made a point of seeking Iranis whenever I am in Bombay and making tentative forays into their “simple” menus. In fact I rarely get beyond the delicious bun maska, a soft bun generously slathered with butter and sliced, which I prefer to the harder “brun” variant. The best example I’ve so far found is at the Yazdani Restaurant and Bakery, an unassuming place dating from the 1950s in the Fort area. I must admit, however, that I haven’t really developed a taste for Irani chai, which is even sweeter than its Indian counterpart and has, for me, an overpowering cardamom flavour.

Another Irani staple is that highly flavoursome family of rice dishes, pulao (see my post on rice for an etymological diversion). I recently sampled a delicious, saffron-laced kheema pulao, made with minced mutton, at one of the oldest surviving Iranis, Kyani & Co (since 1904), in Kalbadevi. With glass-topped chequered tablecloths, bentwood chairs, mirrored columns and ancient ceiling fans, Kyani & Co fulfils most Irani stereotypes. More of these include large jars of biscuits, trays of eggs, old adverts for multigrain biscuits, a beautiful tiled floor, and some discrete Zoroastrian iconography on the walls.

About 30 minutes walk up the same road, passing a magnificent agiary (Parsi fire temple), is the smaller, shabbier Café de la Paix (named after its Paris counterpart). This one has the feel of a tiny refuge for its elderly Parsi and Irani clientele. One of these, a magnificent eccentric, talked to me for nearly an hour in delightfully eloquent English in which he referred to trains “disgorging” passengers, quoted Larkin’s “This be the Verse” and treated me to all manner of largely unrepeatable quips, such as “The two problems with this country are elections and erections”. He zigzagged between Richard Burton and Richard Dawkins, Tennyson and Trump, and told me that he grew up speaking Gujarati but also Dari, the distinctive form of Farsi spoken by the Zoroastrians of Yazd.

Arguably two of the most well-known Iranis have strayed furthest from their roots. No discussion of the topic would be complete without a reference to the world-famous Britannia, popular with Bollywood stars and British Royals. I have no doubt that the food deserves every bit of the praise lavished on it, but I’m afraid my only visit lasted about two minutes until I discovered they served neither chai nor bun maska (which was all I was looking for at the time). Equally famous Leopold Cafe, on Colaba Causeway, has long since become a bar, hugely popular with tourists and office workers but with very few obvious Irani resonances. I can recommend the chicken wings, but there are cheaper and more interesting places to drink in the vicinity.

Not all Irani restaurants, I understand, are run by Zoroastrians. I’ve been reliably informed that some are run by Iranian Muslims, which is also the case for the famous Irani cafes of Hyderabad. I’ve even heard tantalising rumours of some Baha’i-run cafes, both in Mumbai and Karachi, but haven’t yet had a chance to investigate this intriguing possibility further (more, perhaps, to follow). 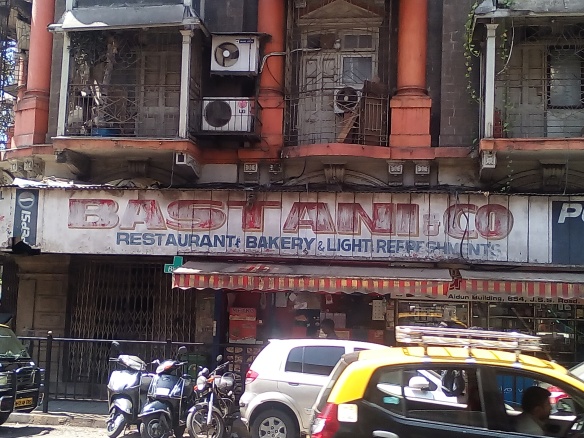 The much lamented Bastani & Co

Sadly, the Irani restaurants are a dying breed. Many have already closed down, like Bastani and Co, pictured above, whose infamous list of prohibitions, such as “No talking to cashier”, “No sitting long”, “No match sticks” and “No leg on chair” inspired a verse from Bombay poet Nissim Ezekiel. Others have been turned into bars, or have lost out to competition from chains such as Café Coffee Day and Barista, or simply suffered from the next generation’s lack of interest. An unlikely reincarnation exists in the UK chain Dishoom, that has managed to create an intoxicatingly glamorous approximation of an Irani restaurant at each of its outlets. Academic and blogger Simin Patel (see Bombaywalla), who acts as a historical consultant for Dishoom, is also working with Hashim Badani on a book about Irani Cafes which promises to be a worthy tribute to a glorious and zany tradition. For now, if you’re in Bombay and you haven’t been to an Irani, please get a move on!