Rio and Venice have their carnivals, Kolkata has Durga Puja and Mumbai has Ganesh Chaturthi. The city’s best-known Hindu festival honours the birthday of Lord Ganesh, the pot-bellied, elephant-headed remover of obstacles. Chaturthi is the Sanskrit word for fourth, and the 11-day festival begins on the fourth day of the Hindu month Bhadrapada. Throughout Mumbai clay idols of Ganesh are installed in private homes, community spaces and grand public temporary structures called pandals. Family members and friends visit each other, recite devotional prayers and chow down on diabetes-inducing quantities of modak, a dim-sum like sweetmeat filled with coconut, jaggery and cardamom. On the final day, the idols are paraded down to the sea for a ritual immersion or visarjan.

My own experience of the festival was slightly haphazard. Walking to my field site on the morning of the first day I visited a small pandal on a whim, only to discover that one of the old men sitting inside knew exactly who I was (a general murmur ensued in which I detected the words “PhD” and “Marathi”). With amazing good luck, one of the men visiting the pandal was a member of Lalbaug Sarvajanik Utsav Mandal (i.e. Lalbaug Public Festival Committee), the committee that manages “Mumbaicha Raja” (the king of Mumbai) one of the most famous pandals in the city. He kindly offered to take me to see both Mumbaicha Raja and its even more famous cousin Lalbaugcha Raja, sidestepping the hours-long queues I would have otherwise had to brave.

Lalbaugcha Raja, the most famous murti in Mumbai

At Lalbaugcha Raja, in particular, I felt immensely privileged to witness proceedings at 2am from a makeshift balcony above a row of shops, which off-duty policemen and women were using as a place to doss down. From here I could observe three separate queues, and jotted down the following:

“The immensely long rank and file mostly sheltering under umbrellas for most of the way; then as they approach getting their phones out to photograph and video; endless chants of ‘Ganapati Bappa – Morya!’ They are only allowed to go as far as a barrier about 10 metres away from the murti [idol]. One guy briefly sits on his friend’s shoulders as he deploys his telephoto lens. At the exit point a husband and wife hurl abuse at the heavy-handed attendants moving them along….

“…Then a number of gradations of VIP who actually get to touch Ganesh. At the lower end it still looks like a bumpy, jostling ride, although the members’ line looks quite civilised until they reach the feet of Ganesh, which prove to be the great levellers, as black clad female attendants yank each devotee away after slightly less than a second and shove them towards the exit…

“…And of course as they approach the murti many of the devotees sneak in a quick selfie.”

The “immensely long rank and file” at Lalbaugcha Raja

Away from this grand public spectacle, I felt no less privileged to witness the minutiae of Ganesh Chaturthi as a family celebration in the BDD Chawls, my field site. Right from the beginning the contrast to a British Christmas was stark. For example, buying and taking home the household Christmas tree has tended to be a fairly functional business in my experience (although I remember a memorable walk up the Old Kent Road some years back). Bringing home the family Ganesh murti, on the other hand, is a joyous occasion, in most cases replete with a crack team of drummers hired for the journey and good deal of chanting and dancing in the streets.

Household Ganeshes are installed in lovingly decorated shrines and generously supplied with bananas, apples, coconuts and, naturally, modak. I’ve lost count of the number of processions I followed, and private shrines I visited, usually to join in the evening aarti (prayer) and invariably to fend off or succumb to offers of modak. 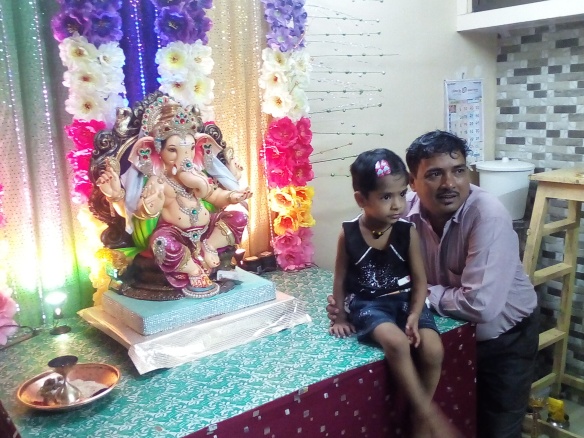 Another Ganesh in another BDD Chawl room

Between these two poles – the mêlée of the top tier public pandals and the intimacy of a family recitation of Sukhkarta Dukhharta (the most famous aarti which celebrates Ganesh as bringer of joyer and remover of sadness) – are any number of smaller public pandals organised by community mandals (committees). One of my favourites, on Delisle Road opposite the BDD Chawls, was at the Panchganga Housing Society, where an eco-friendly central murti is surrounded by a spectacularly creative troupe of smaller idols, each with a specific environmental message. 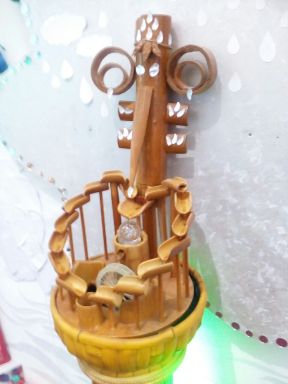 Unfortunately, an untimely bout of Dengue Fever prevented me from enjoying the immersions on the final day. However, many don’t wait until the last day to do visarjan, and I was able to witness a number of idols from BDD Chawl 12 being paraded out of the building and into a waiting truck, amid much drumming and dancing, in readiness for a late-night jaunt to the seaside.

Perhaps the most striking memory of the whole festival was a conversation with some of my Ambedkarite Buddhist friends in the BDD Chawls. I am used, by now, to the derision with which some of this community regard Hindu beliefs and practices. “Fake Gods” and “Fake history” are phrases often thrown about, and I have frequently been told that “Hindu” means slave, and was an epithet applied to India’s indigenous population by waves of invading Brahmins from Central Asia or (depending on my informant), Portugal. While I cannot agree with every nuance of this view of history, I can understand how a community that changed their religion to escape being at the receiving end of the worst excesses of the caste system would take a dim view of religious ideology that drove these excesses. However, I was shocked not only to be given the well-established argument that Ganesh Chaturthi had only been popularised little over a century ago by freedom fighter Lokmanya Tilak (partly as a way of getting around a colonial injunction against large social and political gatherings other than Islamic Friday Prayers), but also to be informed that Tilak had in fact invented Ganesh as a deity!

“What about ancient carvings of Ganesh at caves like Ellora and Ajanta?” I asked. “How do you explain those?”. All recent modifications, according to one Republic Party of India stalwart who happens to have a Hindu wife. All these carvings would have originally been elephant figures, part of a wider Buddhist cosmology, and it was only in the 19th century that they were converted by unscrupulous craftsmen to represent the newly-created Lord Ganesh. Flabbergasted out of my usual anthropologist’s practice of biting my tongue I put up an impassioned argument in shaky Hindi on behalf of Ganesh and his venerable old age, but quickly realised I was getting nowhere. “Oh well,” I excused myself, “Time to go and worship fake Gods”. I decided my approach for the rest of the festival would be to steer clear of theology and “Keep Calm and Eat Modak”. Dengue aside, it served me well.