This is the first in an occasional series on Bombay/Mumbai, where I am spending 2017 conducting fieldwork as part of a PhD in linguistic anthropology. I am specifically interested in language, identity and urban change in the former cotton mill districts of the city. However, I reserve the right to write whatever and whenever I damn well please!

I first heard of the BDD chawls from an architect friend. If you’re interested in Mumbai’s changing neighbourhoods, he said, you should visit the BDD chawls. His description of the long drawn out wrangling over their proposed re-development reminded me a little of Battersea Power Station and, intrigued, I headed over to middle-class Worli neighbourhood to find them.

The chawl is a Mumbai housing archetype. The canonical chawl is a densely-packed block of tiny tenements or kholis (literally: room) accessed from external corridors. The Bombay Development Division (BDD) chawls, constructed in the 1920s to house mill workers, policemen and, for a few years at least, prisoners, deviate from this pattern with a wide internal corridor, open at both ends. The buildings immediately impress you with their heavy-set construction, a fact celebrated by their residents.

It was only after visiting the BDD chawls in Worli that I realised that there were three other BDD chawl sites in Mumbai. One of these, in Delisle Road (now N M Joshi Marg), is in Lower Parel, the heart of Mumbai’s former cotton mill district. As it happens, I had already visited this site on a previous visit last June, unaware of its history, and spent a happy hour trying to converse in Marathi with (among others) a journalist, a social worker and a kabaddi player. 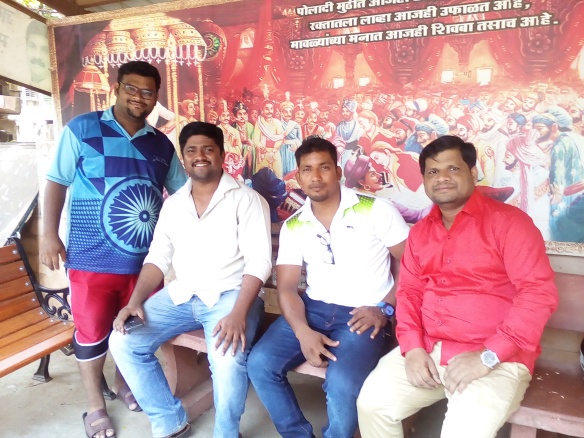 “Among others, a journalist, a social worker and a kabaddi player”

Since returning to Mumbai I have been visiting the Delisle Road chawls on a regular basis. The 32 chawls are situated within a small grid of streets off Delisle Rd, directly next to Mumbai’s second biggest mosque, the Bawla Masjid and close to the former Mafatlal Mills site, now the glassy blue Marathon Futurex office complex. Within the grid of streets itself, there are various temples, shops and a police station in addition to the chawl buildings and a newer, six-storey residential compound called Shivaji Nagar.

So much about the area appeals to the aspiring linguistic anthropologist in me. The streets resound with Marathi, the state language of Maharashtra. In fact I am constantly overwhelmed by the extent to which I hear Marathi across the whole of this part of the city. This is at odds with the somewhat sneering comments made by friends of mine from the “metropolitan elite” – many who speak no Marathi at all – that Mumbai’s public life functions entirely in Hindi and English and (according to one Delhiite who, on moving here 13 years ago, toyed with a Marathi grammar book before mislaying it and abandoning the language acquisition project entirely) that “even Maharashtrians don’t like speaking Marathi outside the home.”

Despite the predominantly Maharashtrian demographic, these chawls are no monoculture. Various people have told me that the families living in Shivaji Nagar are mostly Gujarati and Marwari, and writer G K Ainapure (in Neera Adarkar’s superb edited volume The Chawls of Mumbai) reminisces about the Christian couples he used to gawp at making out on the building’s balconies. Given the proximity to the Bawla Masjid, one might expect a large Muslim community, but I have only encountered a handful of individuals. This includes a barber’s assistant from Uttar Pradesh who speaks only Hindi. I have watched his boss switch from Marathi, the language in which he banters with his customers, to Hindi, when he wants to instruct the assistant or include him in gossip in which case the entire group switches over.

Most of the Maharashtrians here are Hindu, and Electoral Ward 198 (within which the Delisle Road chawls fall) is regarded in the press as a sure-fire win for the Shiv Sena candidate in the recent municipal elections. Having emerged in the 1960s on a “Mumbai for the Maharashtrians” manifesto, the Shiv Sena has since embraced the broader Hindu nationalist agenda and their flag is an uncompromising splash of saffron. The “Shiv” in their name refers not to the Hindu deity, but to the 17th century Maratha warrior-king Chhatrapati Shivaji. In homage to Shivaji’s birthday a few days back, a friend showed me a clip on YouTube from a series celebrating the Chhatrapati’s life. I couldn’t help wondering why the specific episode he chose was that in which Shivaji (who spoke in Marathi in the clip) killed the Muslim overlord Afzal Khan (who only spoke in Hindi). My friend told me it was a “very historical moment for Maharashtra”, and that Shivaji was his “ideal person”, but I also couldn’t help remembering how emphatically he had told me the day before that there were no Muslims living in his chawl…

Most of my time, however, has been spent with another community, the Dalit [“untouchable”] Buddhist followers of Dr B. R. Ambedkar, anti-caste ideologue and chief architect of India’s constitution. A chance re-encounter with my friends from the June visit, led to me being invited to join their Republic Day celebrations on January 26th. Any hope of being a wallflower on this occasion was quickly banished when I was invited to help hoist the Indian flag, to fumblingly garland a photograph of Ambedkar and to say “don shabda” (two words) in Marathi to the assembled company. Being an attention seeking show-off I was (fairly) happy to oblige, telling myself that from a methodological viewpoint this was a great way to make inroads into my research site.

Since then I have spent many happy hours sitting and chatting in the seating area outside the two Dalit-dominated chawls. I have met with incredible generosity and warmth and have been invited into various homes and have even attended a condolence ceremony for a new friend’s grandmother. Conscious of wanting to give as well as take (the problematic relationship of the researcher and the researched deserves a post in itself) I have offered English conversation classes to those who want, and now that the madness of the elections is over I hope to make a start.

Many of the people I’ve met are actively involved in the Republican Party of India which, despite the name, is a left-leaning social justice-orientated outfit dedicated to furthering the aims of Dr Ambedkar. The party seems to have received limited coverage in the English-language press, despite currently campaigning in a coalition with the BJP which to me seems as odd, and perhaps as opportunistic, as a grassroots socialist party in Britain hitching itself to the Tories in their current right-leaning posture.

To date, learning more about Ambedkar and about this community, has been the most exciting part of my research. I was aware of Ambedkar’s conversion to Buddhism in 1956 as a final escape from the hierarchical strictures of caste Hinduism, and was aware that many from his community, the Mahar, had followed suit. What I was unprepared for was the level of devotion towards Ambedkar himself. “We do not worship any god”, a social worker told me. “Only Buddha and Dr Babasaheb Ambedkar. He is our mother, our father, our god…”. All the homes I have seen display a prominent photo of Ambedkar next to an image of the Buddha, and the customary greeting is not the Marathi namaskar, but Jay Bhim (“victory to Bhim[rao Ambedkar]”). The seating area I referred to is called the “Jay Bhim Katta” and its backdrop is a tryptic of Ambedkar, the Buddha and – somewhat surprisingly for me – Chhatrapati Shivaji.

There is so much more I could say, but right now I have far more questions than answers – not least those concerning the impending redevelopment of the entire site which seems to be facing yet another road block since no developers responded to the government tender issued last month – and so will leave it here. For now…